The Eel River collection is what archaeologists call a legacy collection, meaning it was excavated in the past and not analyzed or studied by the same archaeologsts who excavated it. What makes the archaeology of the Eel River site particularly interesting is that at least nine different archaeologists running different excavation projects at different times in the past excavated the Eel River Site. Each of these archaeologists had differing reasons for their excavations as well as different methods of excavating, recording, and storing their artifacts. Archaeologists at Plimoth Patuxet Museums brought together all of the different artifact collections in 2019 for analysis, identifying over 40,000 artifacts that make up the current Eel River Collection. The earliest known excavation of the site was in the 1940s by the Museum's founder, Harry Hornblower II while the most recent excavation was completed in 2019 by the professional cultural resource management firm, the Public Archaeology Lab. In addition to excavations  and because the site is on the Plimoth Patuxet Museums' campus, staff working in the living history exhibits have uncovered artifacts while carrying out tasks like gardening or digging fire pits or holes for wetu (house) posts. Their finds have all been added to the collection. Each of the excavation projects is summarized below.

The Eel River archaeological site was likely shown to Harry Hornblower II, the founder of Plimoth Patuxet Museums, by his family's gardner and amature archaeologist Jesse Brewer. The site is located beneath what was the Hornblower family estate's garden in the early 20th century. Because these two men were not professional archaeologists, they did not carry out any systematic excavations in the area, but did collect a number of objects from the Eel River site in the 1930s and 1940s. Although none of their notes about this site have been recovered, the Museum holds a number of their finds from the site, as well as their card catalogs documenting these objects. Most of what they kept was complete projectile points or tools, many of which can be identified and assigned date ranges.  An excavation at the adjacent RM Site (pictured below), in the 1940s also uncovered additional components of the Eel River site. 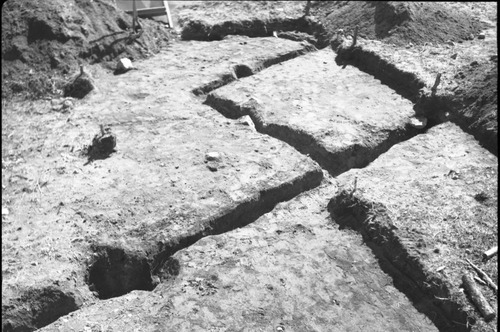 In 1988, archaeologist Douglas George excavated two test pits before the Museum opened for the season. He reported that he did not recover much cultural material, but was able to record valuable information about the soils. His test pits may have inspired staff members of the Wampanoag Interpretive Program to excavate in 1989 before they planted a new garden. They examined an area where a wetu (house) had been recently deconstructed and the area where the garden was going to be planted. Some, but not all, of their excavation notes remain with the Museum, but none of their finds were studied or analyzed before 2019.

From 1991-1994, Dr. Barbara Luedtke conducted an archaeological field school at the Eel River site that was sponsored by Plimoth Patuxet Museums and the University of Massachusetts Boston's Departments of History and Anthropology. Her field school was the first organized scientific excavation conducted at the Eel River site. The Museum wanted to know more about the site, so the goals of Dr. Luedtke's field school were to determine the age, boundaries, and degree of disturbance of the archaeological site. To meet these goals, Dr. Luedtke and her team excavated 71 test pits to determine the site boundaries, as well as three large excavation blocks covering a total of 42 square meters and an additinal three excavation units in between the blocks. They discovered that large portions of the site had been disturbed or destroyed in the early 20th century during landscaping or construction activities. Most of the artifacts they found were tools or flakes from making stone tools, and they found a Neville point that was considered to be the oldest artifact from Eel River until reanalysis of the collection in 2019. Dr. Luedtke's team also unearthed the remains of three hearths, five earth ovens, two fire pits, five refuse pits, one storage pit, and ten postmolds. Dr. Luedtke concluded that the area was likely used as a hunting and fishing  camp and stone tool making area in the Late Archaic Period (5,000-3,000 B.P.) and by the Late Woodland Period (1,000-500 B.P.)  it was regularly inhabited by Wampanoag people hunting, farming, and shellfishing.

From 1994-1996, Craig Chartier of the Plymouth Archaeological Rediscovery Project conducted excavations with staff members of the Museum's Wampanoag Interpretive Program. The Indigenous staff members wanted to interpret active archaeological projects to the public while the museum was open, so they excavated a few units for public education purposes.

During the 2019 digitizitation of the Eel River archaeological collection, a set of artifacts from a 1999 excavation was discovered. This excavation was not mentioned in any literature or notes about the Eel River site and was a surprise to the staff who were digitizing the collection. Working with legacy collections often means rediscovering lost data! Almost all of the bags of artifacts from this collection have context information, meaning we know where and when they were excavated, but we do not have any of the excavators' notes to help interpret them. So far, a single set hand-drawn maps from this excavation has been found.

In 2006, the Museum hired the Andrew Fiske Memorial Center for Archaeological Research to excavate in preparation for the building of a new handicap accessible ramp. Because the pathway was going to be constructed over the Eel River archaeological site and would involve installing underground components, the Museum wanted to prevent as much damage as possible to the archaeological resources in the ground. The Fiske Center was hired to determine  where significant archaeological resources might be located and make recommendations to the pathway construction plans to lessen damage to the Eel River site. They excavated a total of 57 test pits along a grid pattern and along the area of the proposed pathway and discovered objects pertaining to Wampanoag stone tool making. Because of their findings, the archaeologists recommended that the pathway should be built in areas where the site had already been disturbed by 20th-century landscaping and construction activities, that pathway components over 20cm deep in the ground should not be constructed, and that in areas where they found concentrations of artifacts the pathway should be elevated above the current ground surface . They also recommended that tribal members and members of the Museum's Wampanoag Interpretive Program should be consulted and informed of their excavation results before the Museum installed the pathway. 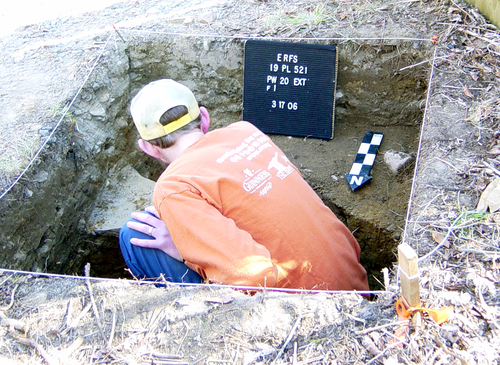 An Archaeologist Excavating a Test Pit, 2006

In 2009, the Public Archaeology Laboratory (PAL), a professional archaeological contract firm, was hired by the Museum to carry out an archaeological survey in preparation for the building of another new pathway on Museum property. Like the 2006 dig by the Fiske Center, this project was completed to determine if the pathway construction would disturb the Eel River archaeological site. PAL excavated seventeen 50x50 cm test pits and found that most of the proposed pathway area was located in places where the Eel River site had already been disturbed by 20th-century landscaping and construction activities or by erosion. They recommended that the one small portion of the new pathway that did fall within the boundaries of the Eel River site be built without below-ground components to avoid disturbing the archaeological resources in the ground. 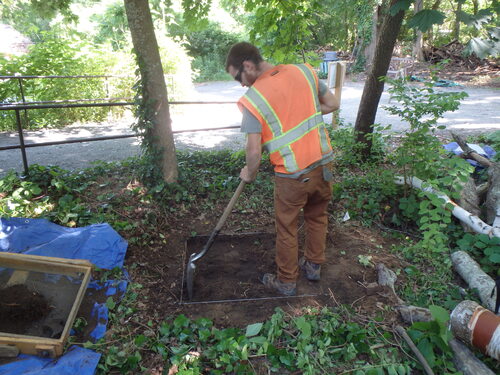 In 2017 the Museum planned to build a new wetu (house) in the Wampanoag homesite. Because the wetu would need posts inserted in the ground as part of its frame, Dr. Kathryn Ness, the curator at the time, dug two test pits to make sure that the construction would not disturb the archaeological site. She and two interns performed the excavations during Archaeology Month in October while the Museum was open so they could demonstrate archaeology to the public. They found that the holes dug for the new wetu's posts would not go deeper than the modern topsoil, but recommended screening the dirt that would be dug for the post holes. They also recommended that modern coins be put into the post holes  so that future archaeologists do not confuse them with historic archaeological features. When the holes were dug for the construction of the wetu in 2017,  Indigenous History and Culture Manager at Plimoth Patuxet Museums Timothy Turner screened the dirt for artifacts. He found a small number of artifacts that were recorded and added to the current collection. 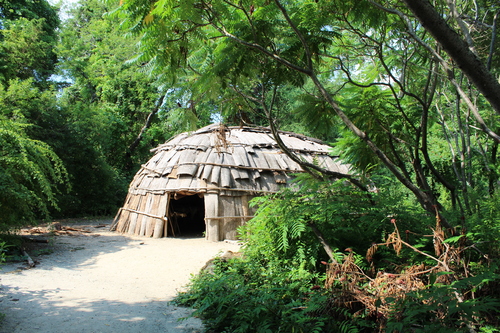 The Completed Wetu (house) Built in 2017

In 2019, the Museum hired the Public Archaeology Lab (PAL) again to conduct excavations at the Eel River Site in preparation for a new, modern interpretive building to be built for the Wampanoag homesite. Because of the invasiveness of building construction, archaeologists were asked to make sure the new building would not disturb or destroy the archaeological resources in the ground. PAL excavated fifty 50x50 cm test pits on a grid as well as four 1x1 meter excavation units, recovering a total of 1,967 artifacts. During their excavations, they consulted with tribal representatives from the Mashpee Wampanoag Tribe and the Wampanoag Tribe of Gay Head (Aquinnah). Based on their findings as well as the findings from previous excavations and research, they concluded that the Eel River archaeologial site was regularly inhabited by the Wampanoag from the Middle Archaic period (8,000 to 6,000 years ago) onward and that the archaeologial site contained artifacts from many chronological time periods. They concluded their project by recommending that the Eel River archaeological site be avoided in all construction projects and that it should be named to the National Register of Historic Places for its potential to provide new information about Indigenous settlements around Plymouth harbor and how those settlements evolved and changed over time, especially in the time period relating to European contact. 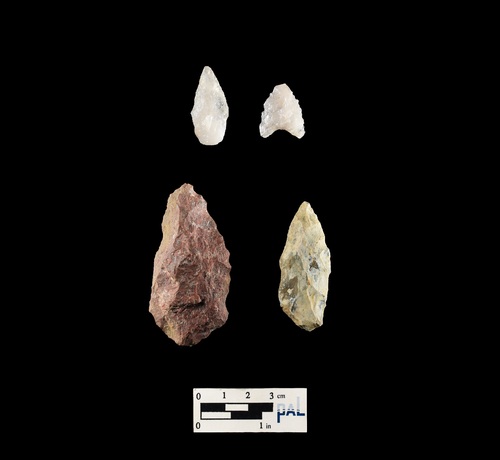